Examples of the Companions in Seeking Knowledge

Ustādh Abū al-Ḥasan (ḥafiẓahullāh) delivers an important khuṭbah at TROID (2017/08/25) concerning the importance of seeking and attaining knowledge using the examples of the great zeal and diligence of the Companions of the Messenger (ṣallallāhu ʿalayhi wa-sallam) in seeking knowledge.
Abū al-Ḥasan Mālik, Audios, Manners of Seeking Knowledge, Seeking Knowledge, Wuḍūʿ
May 26, 2022  |  Leave a Comment

We find in the authentic Sunnah a narration in which the Messenger (ṣallallāhu ʿalayhi wa-sallam) said,

“My Ummah will divide into 73 sects1, all of them will be in the Fire except for one, and that is the Jamāʿah.” It was said, “And who are they, O Allāh’s Messenger?” He responded, “That which I and my Companions are upon today.”2

There are numerous benefits which can be derived from this ḥadīṭh, and from them is the great desire of the Companions (raḍī Allāhu ʿanhum ajmaʿīn) in seeking knowledge and understanding of the dīn of Allāh (subhānahu wa-taʿāla); such that when the Messenger (ṣallallāhu ʿalayhi wa-sallam) informed the Companions about the those who will be saved from the fire, they were eager to know the description and attributes of this saved sect.

We likewise find this zeal displayed by the Companions in the Messenger of Allāh’s (ṣallallāhu ʿalayhi wa-sallam) farewell sermon, a great exhortation which caused the eyes of the those present to shed tears, and the hearts to tremble from fear due to that which was being conveyed to them. The Companions realising that this was a farewell sermon were still concerned with the affair of their religion, asking him to advise them.

The tremendous desire of the Companions to learn the Sunnah and the affairs connected to this blessed dīn was so great that they would go to the home of the Messenger (ṣallallāhu ʿalayhi wa-sallam) to ask concerning his worship; and there were those who walked with him and ate with him seeking to learn from his Sunnah and mannerisms. The affair of Abū Hurayrah (raḍī Allāhu ʿanhu) is a wonderful example which attests to the enthusiasm and thirst which the Companions had for seeking and learning ʿilm. He was known as the ‘memoriser’, such that it is recorded in Ṣaḥīḥ al-Bukhārī, Chapter: Kitāb al-ʿIlm, that somebody asked the Messenger (ṣallallāhu ʿalayhi wa-sallam) about who would be most blessed with his intercession on Yawm al-Qiyāmah, and the Messenger replied, ‘O Abū Hurayrah! I did not think that anyone would precede you in asking this’, and this was due to his diligence in learning aḥādīth.

This diligence in seeking knowledge was not only present amongst the male Companions of the Messenger (ṣallallāhu ʿalayhi wa-sallam), but rather it was also present amongst the female Companions, as can be found in the narration in which they complained to Messenger regarding how the men took up all of his time, and so they requested from him a day which could be dedicated to teaching the women.

It is important that we strive in seeking knowledge and studying the foundations of the dīn such as tawḥīd, since if this affair of creed is incorrect then everything which follows will be incorrect. So we strive to study the works of Ūṣūl al-Thalāthah, Kitāb al-Tawḥīd, Qawāʿid al-ʿArbaʿ, study and learn from the scholars of the past, the likes of Shaykh ibn Bāẓ, Shaykh al-Albānī, and Shaykh ʿUthaymīn (raḥimahum Allāh); as well as present day scholars such Shaykh Rabīʿ ibn Hāḍī al-Madkhalī, Shaykh Ṣaliḥ al-Fawzān (ḥafiẓahum Allāh) and other than them. Strive to learn the affairs of tawḥīd and ʿibādah upon the methodology of the Companions.

We ask Allāh to give us beneficial knowledge and protect us from knowledge which does not benefit. 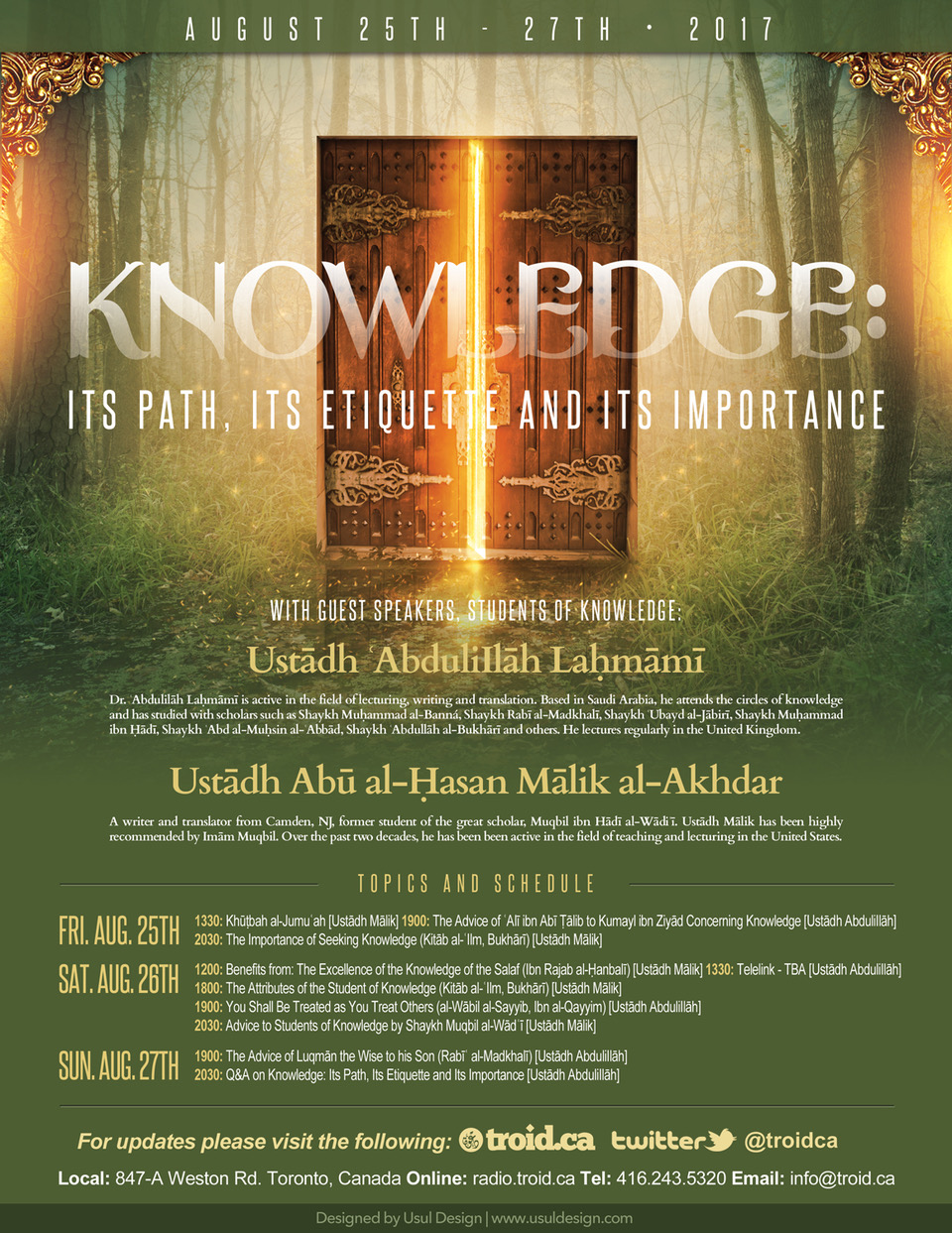 Benefits Pertaining to Knowledge from…

Give Thanks and Praise to Allāh who G…

Naming a Child Conceived from Adultery or…

The Contradictory Beliefs of the Christia…

Who Is a Child of Fornication Ascribed To?

Naming a Child Conceived from Adultery or…