Questions and Answers from the Seminar: Men Are Known By the Truth

The question and answer session from the seminar, The Truth Is Not Known by Men, Men Are Known by the Truth (Toronto, April 2012).
Abū Ḥakīm, Abū Khadījah, Abū ʿIyāḍ, Audios, Methodology, Questions on Manhaj, Shaykhs and Students of Knowledge
Apr 26, 2012  |  Leave a Comment

[Q1]: (A sister asks): There are those who ascribe to salafīyyah however when it comes to the people of bidʿah, they are very lenient and gentle with them, you will find them having hundred’s of excuses for them, however when it comes to their brothers and sisters from Ahl al-Sunnah, you find them constantly criticizing them and being harsh with them, instead of being patient and gentle with the salafiyyoon, what is your advice to them?

[Q2]: May Allāh preserve you, akhī, do you believe that this masjid, Masjid al-Furqān (TROID) is the only masjid upon the “correct” salafīyyah?

[Q3]: What is the condition of QSS? Many people attend that masjid and claim that they are upon Salafīyyah?

[Q4]: What should I do if someone in my family has a janāzah at KBW? What if the Imām gives a small speech there, should I listen to it?

[Q5]: There were some brothers who (attempted) to cause some destruction in our community, which led to some splitting in our community. Some of them admitted to be connected to madīnah.com, being advised by them (madīnah.com – something they were called out on and never denied) and that they were involved in directing a plot, al-Hamdulillāh, they failed in their objectives and have now cooperated with a new centre called Dar al-Arqam, this organisation has cooperated with Said Regeah of al-Maghirb Institute, the companion of Abū Usāmah (who the Scholars have spoken against, he who attends KBW), they have links on their pages to Tariq Ramaḍān and Tariq as-Suwaydan, they continue to speak ill of and attack the Salafī centre here, whilst making a multitude of excuses for ahl-ahwā, what is your advice to them? For proofs of some of these associations, see the forum thread on this topic.

[Q6]: Is there blame on the youth who ignorantly follows Ahl al-Bidʿah,? How do you explain to him the evil of these groups? Are these youth fooled if they say “we don’t focus on refutations, rather important matters of the dīn”?

[Q7]: Would the ṣalāh of a person who supplicates in English be valid?

[Q8]: Can you advise brother who come to the masjid to benefit, about those who waste time with vain talk like women, food and UFC and that end up pulling others away from benefiting? 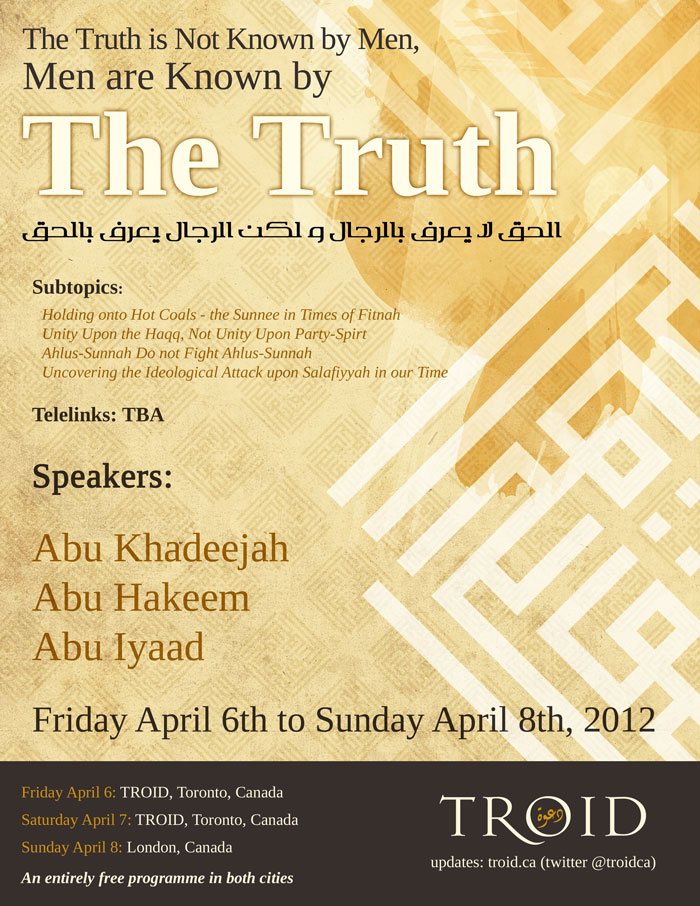 How to Distinguish Salafiyyah amongst…

The Truth Is Not Known By Men, Men Ar…