A lecture from the 2008 Toronto leg of the Holding on to Islām seminar. The one who destroys your house from the inside is worse and more dangerous than the one who tries to destroy your house from the outside; the same is true for the people of bidʿah who claim to be Salafī, who quote from some of the Salafī scholars etc., yet their aim is to destroy our ʿaqīḍah and our manhaj, leading us into the Fire. How should the Salafīs deal with these people?
Abū Khadījah, Audios, Lessons in Manhaj, Methodology, Shaykhs and Students of Knowledge
Mar 26, 2017  |  Leave a Comment

Know that It is obligatory to have unconditional obedience to Allāh and His Messenger (ﷺ). There is no path to Jannah except by way of the Ṣaḥābah. Allāh said,

And whoever contradicts and opposes the Messenger (Muhammad ﷺ) after the right path has been shown clearly to him, and follows other than the believers’ way, We shall keep him in the path he has chosen, and burn him in Hell – what an evil destination!
[al-Nisāʾ, 4:115]

Also, the rulers are to be obeyed and the scholars respected.

The Prophet (ﷺ) said that what he feared most for his Ummah is callers leading the people astray, callers standing at the gates of the hellfire.

The Salafī manhaj is one that is based on clarity. The Prophet (ﷺ) mentioned, “There never ceases to be a group from my Ummah who will always be upon the truth, and they are not harmed by those who oppose them.” This group is always present. Sometimes they are seen and are loved by the people, such as the Ṣaḥābah after the death of the Prophet (ﷺ), and sometimes they are hated, such as Muḥammad ibn ʿAbd al-Wahhāb. The Salafīs are clearly upon the truth whether they are liked or whether they are hated.

Shaykh al-Islām Ibn Taymīyyah mentioned that the Muslims are of three categories as it relates to Islām:

1. the aided, victorious group;
2. the group that abandons them;
3. and the people of opposition (people of bidʿah)

Ask yourself, which group are you with?

The Prophet (ﷺ) said, “I have left you on this clear white plain, its night is like its day, anyone who leaves it will be destroyed.” There are no generalities in this statement. How can anyone after knowing this Ḥadīth go astray? The Prophet (ﷺ) did not leave us upon generalities or vagueness.

The people of bid’ah sometimes come with the clothing of Salafīyyah and lead the Salafīs astray. They quote some of the scholars that we love, they quote ayahs from the Qurʾān, but they do not espouse the Salafī manhaj and ʿaqīḍah. They are not Salafī despite what they claim. These people are the most dangerous to the Salafīs because they try to resemble the Salafīs. So be aware of them and their deviation so you can guard yourself against them. 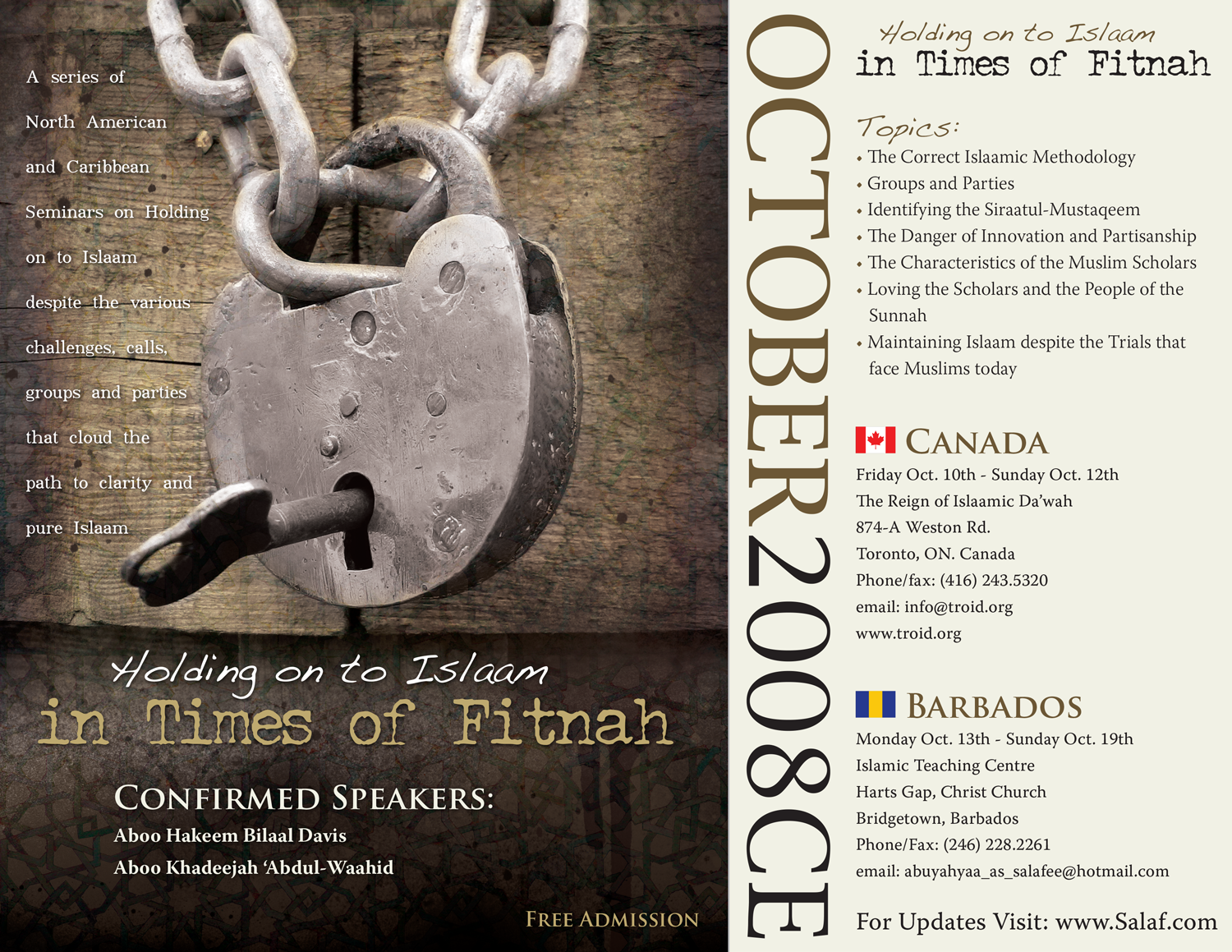 Cooperating within a Community upon B…