The Crime of Tamyīʿ upon the Salafī Manhaj

A selection of questions and answers from the works of the noble shaykh, ʿʿUbayd ibn ʿAbdullāh al-Jābirī that encompass the topic of tamyīʿ.
Abū ʿIyāḍ, Audios, Lessons in Manhaj, Methodology
Jun 24, 2013  |  Leave a Comment

Reading from some of the Questions and Answers of Shaykh ʿʿUbayd al-Jābirī.

[Q1]: When you advise a person, do not sit with the various groups and parties (Ikhwān al-Muslimīn, Jama’aatut-Tableegh etc.) they say, “this is the manhaj of Shaykh Ibn Bāz (raḥimahullāh)”, that he would sit with every faction and group!

[Q3]: Some people start speaking about the grave, severe issues and they make the excuse “we are not forced to follow anybody (i.e. a given scholar’s critique).”

[Q5]: When a person is forced and compelled to quote from the people of knowledge, what are the Shariʿah guidelines on how we quote from books?

[Q6]: What is the difference between calling someone ‘a person of Bidʿah’ or ‘an innovator’?

[Q7]: A person goes to them (Ikhwān al-Muslimīn, Jama’aatut-Tableegh etc.) claiming that he is advising them, he continuously sits with them over years…is this the way of the Salaf?

[Q8]: What is the ruling on mixing (with Ahl al-Bidʿah,) in general. Also, more specifically (the Ikhwān al-Muslimīn or Jamaa’atut-Tableegh) whether they are those who make takfīr or whether they do not make takfīr?

[Q9]: Do we distinguish between boycotting a person of bidʿah who calls to his innovation and one who does not call to it, how do we interact with these two types of people?

[Q10]: When we see gatherings that take place and in these gatherings, the speech is of worldly affairs (nothing religious), what is the ruling on this type of gathering?

[Q11]: When there is a Salafī who has relatives upon innovation, how should he behave (with them) in this situation?

[Q12]: What is the ruling on a Salafī who persists in mixing with the people of innovation? He agrees that he should boycott them (Ahl al-Bidʿah,) but claims he has a worldly need to mix with them…or he says “al-Albānī says this type of boycotting is not befitting because we are in a time where the ummah is weak”?

[Q13]: Is the following statement true and correct: The truth is accepted from any person who says the truth and falsehood is refuted from anyone who says falsehood so if a mubtadiʿ (innovator) or a shayṭān or a non-Muslim says a statement of truth then it is affirmed based upon the statement of Allāh, “…Let not the enmity and hatred of others make you avoid justice. Be just: that is nearer to piety, and fear Allāh. Verily, Allāh is Well­ Acquainted with what you do.” [Sūrah-Maa’idah, 5:8]

[Q14]: It is found around our masjids, people of takfīr, jihādees etc. and they confuse the Salafī youth, those who’re upon tasfiyah wa-al-tarbiyah, so these extremists bring doubts accusing al-Albānī and Abū Ḥanīfah with ʿIrjā’ and likewise they claim that Shaykh Rabīʿ of lying against Sayyid Qutb and they declare the rulers to be disbelievers based on the āyah, “whosoever does not judge by what Allāh has revealed, such are the Kafirun (i.e. disbelievers – of a lesser degree as they do not act on Allāh’s Laws).”  [Sūrah-Maa’idah, 5:44].  And they call to the manhaj of Sayyid Qutb and spread his books. How do we interact with these takfīrees and how do we stand out against them? 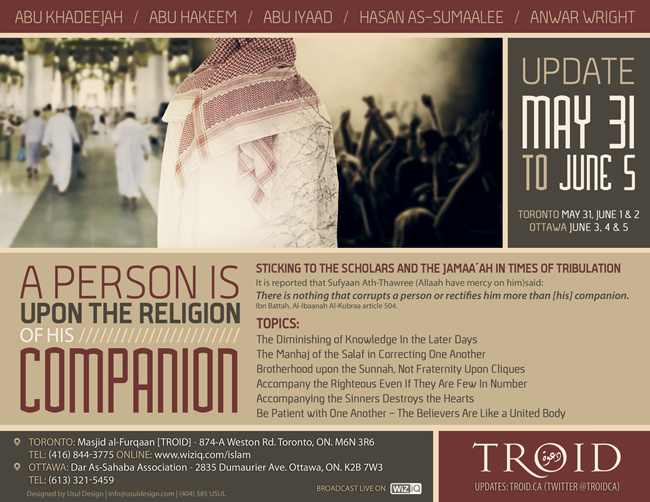 The Consensus of the Scholars in Hold…

Boycotting the People of Bidʿah and W…