Who Are the Salaf?

A discussion on the importance of clinging to the manhaj (methodology) of the righteous predecessors (al-Salaf al-Ṣāliḥ). The prophetic methodology which is taken directly from the Book and the Sunnah, and inherited by the scholars, generation upon generation, preserving Islām in its original form.
Articles, Imāms of the Sunnah, Methodology, Ṣaliḥ al-Fawzān, The Saved Sect
Feb 5, 2022  |  Leave a Comment

The Salaf are the Companions and their followers.

When Allāh mentioned the Muhājirīn (from Makkah, the earliest companions) and the Anṣār (who hosted them in Madīnah) in Sūrah al-Ḥashr, He said:

“…And those who come after them, those who say: ‘Our Lord! Forgive us and our brothers who have preceded us in īmān.’
[al-Ḥashr, 59:10]

What is it that they have preceded us in? In īmān (correct beliefs, actions, and statements).

And they further supplicate:

And do not allow there to be any rancor in our hearts for those who have believed.
[al-Ḥashr, 59:10]

Meaning: Jealousy or hatred for the believers. Allāh hates and is angry with any person who would despise the early predecessors, from amongst the Companions, the Muhājirīn, the Anṣār, and those who followed them in iḥsān (completeness and proficiency) from the early favored generations. His actions will be like scattered dust in the wind, because his actions were not founded upon guidance.

The article is excerpted from the TROID Publication: Essential Questions & Answers on the Salafee Methodology. 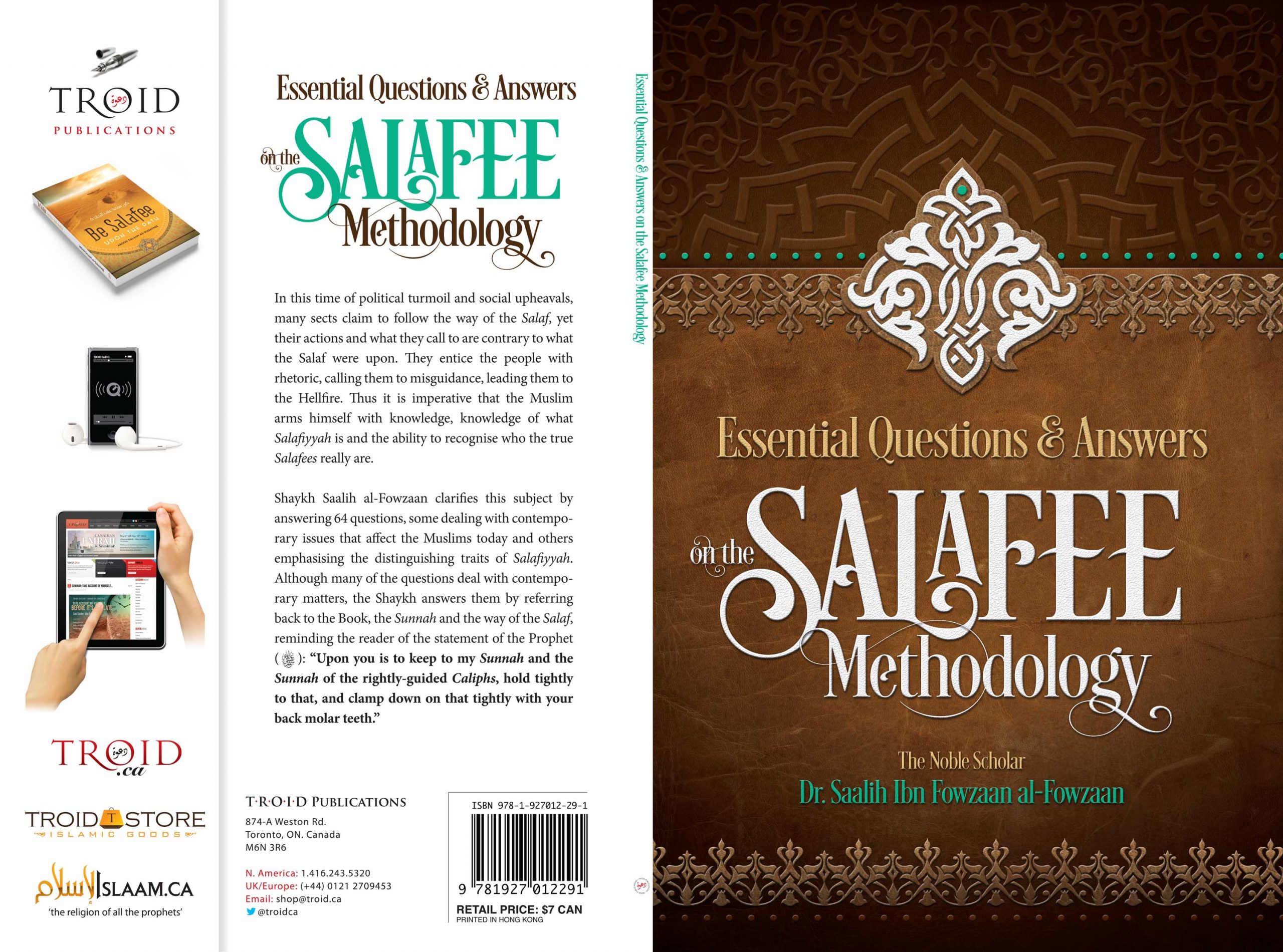 Actions are only acceptable when they have two conditions fulfilled within them:

Nay, the one who submits his face to Allāh while being a person who does good deeds shall have his reward with his Lord. No fear shall overtake them nor shall they grieve.
[al-Baqarah, 2:112]

This Verse contains the two conditions for the acceptability of any action:

This is the methodology of the righteous Salaf. It is taken directly from the Book and the Sunnah, through the scholars who are firmly grounded in knowledge.

Anyone who wishes to traverse the path of the Salaf must abide by these Islamic codes. Today, there are so many people who claim to be upon the methodology of the Salaf, whilst they are upon misguidance and serious errors. They ascribe these errors to the methodology of the Salaf. And thus, you find disbelievers, hypocrites, and all kinds of people with sickness in their hearts, all of them, attacking and insulting the Salafīs. Every crime committed, every bit of destruction, and every trial faced is blamed on the Salafīs. However, Salafiyyah is absolutely free from such things, and the Salaf themselves are also free of those things.

Such people are not upon the path (the methodology) of the Salaf, they are upon the methodology of misguidance. Even when such people take names ascribing to the Salaf, it is an obligation that we make a distinction between the mere name and claim of a label and its reality. There are surely people who make claims or give themselves labels of attachment to things that are just not true. Such people are not Salafīs, and the early predecessors are free of them.

The methodology of the Salaf is beneficial knowledge, righteous actions, brotherhood in the Religion of Allāh, and cooperation upon righteousness and piety. Whoever holds fast to it shall be saved from all types of trials and evil things, and he will gain the Pleasure of Allāh, the Glorified and Most High.

The first predecessors from the Muhājirīn (of Makkah), the Anṣār (who hosted them in Madinah), and those who followed them in righteousness, Allāh is pleased with them and they are pleased with Him. He has prepared for them gardens under which rivers flow. They shall abide therein forever; that is the great success.
[al-Tawbah, 9:100]

Every person wants these gardens that have rivers flowing underneath them. No one wants the Hellfire. No one wants punishment. However, the focus of our talk here is taking the proper steps, the steps that will actually lead you to Paradise and allow you to reach salvation, saving you from the Fire. This necessitates that you follow strictly the methodology of the righteous predecessors.

Imām Mālik (may Allāh have mercy upon him) said:

The Book and the Sunnah are the two things that rectified the first part of this Ummah. And nothing is going to rectify the latter part of this Ummah other than the same Book and Sunnah. They remain present amongst us, and to Allāh is the praise. They are both preserved through the special preservation of Allāh Himself.

Allāh, the Most High, said:

Whoever intends to achieve understanding of them (the Book and the Sunnah) in truth, and thus he takes the proper path to seek knowledge, will find in them righteousness and success. However, the person who makes a claim without any reality behind it, or he just follows blindly those who claim Salafiyyah without being upon the methodology of the Salaf, such an ascription is of no avail. Rather, it would only harm him.

If such a person claims to be a Salafī, it is only a lie and a fabrication against the Salaf and Salafiyyah. He leads the people astray through such an ascription, whether intentionally or not. He is either a person of desires or an ignorant person. As it is said:

“And when claims are not established with proofs, the people who make them are mere claimants.”

So it is obligatory that anyone who claims that he ascribes to the way of the Salaf actually lives up to that name, by acting in accordance with their methodology, as it relates to beliefs, statements, actions, and all interactions, so that he can be a Salafī in truth. This way he could be a righteous example for people, showing them the proper implementation of the methodology of the righteous Salaf.

So whoever wants this as his methodology, then it is upon him to learn about it by studying it firstly, and then to act in accordance with it secondly. Then he must call to it and clarify it for the people. This is the methodology of the Salaf. This is the way of the Saved Sect, the people of the Sunnah and the Jamāʿah, those who are upon what the Prophet (ﷺ) and his companions were upon. Furthermore, he must remain patient and consistent upon that, and he must not go astray when calamities surface. He is not duped by the claims that lead people astray, nor do the whirlwinds (of fitnah) take him in. He remains like this until he meets his Lord, the Glorified and Most High.

May Allāh give success to us all in attaining that which Allāh loves and is pleased with. And may Allāh raise the rank of our Prophet Muḥammad, and likewise that of his family and companions, all of them, and may He grant them peace.

The Origin of Jahannam’s Extreme Temp…

How Muslims Can Snap Out of Doom Scro…

When Exactly Should the Father Name the Child?

Tafsīr Sūrah al-Fātiḥah: The Misguided and Those who Have Earned Allāh’s Anger

Al-Jamāʿah al-Tablīgh: Their Imitation of the Christians in Celebration of al-Mawlid al-Nabī and Their Innovative Forms of Dhikr

Refuting the Saying: ‘O My Lord! I Fear Those Who Do Not Fear You’

The Three Foundations of Happiness